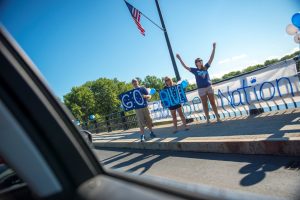 Are first-year students required to live on campus?

How do I get the best possible room assignment?

Students who apply for housing and confirm admission before May 1 have priority for housing assignments – including roommate requests, LLC preference, and do not run the risk of being assigned to a temporary triple!

How many students stay on campus on the weekends?

UMaine isn’t a suitcase campus. Most students stay in Orono on the weekends because there are many entertainment options on campus and off.

How safe is campus?

Very. Members of the University of Maine Police Department patrol campus 24 hours a day with at least two officers at any given time. UMaine offers a program called walking companions where two students will walk you to your dorm at night. All residence halls are locked 24 hours a day.

How many classes are taught by teacher’s assistants?

Not many. Professors teach most UMaine classes, with the exception of English 101 and Calculus I. TAs lead labs and run study sessions.

What is the average class size?

We’re not going to touch this one, but let’s just say there’s so much to do here — every night — that we’ve won national awards for our non-party scene.

How easy is it to talk to a professor?

Very. UMaine professors are known for working closely with undergraduates. In addition, they have office hours and often are willing to meet with students outside those office hours.

Active. Greeks make up as much as 12 percent of the student body — one of the highest percentages in New England. We have 18 fraternities, seven sororities and two Greek service organizations. Our Greek system is mostly community-service based, so you can toss those “Animal House” stereotypes out the window.

Can first-year students have cars?

Can students have pets on campus?

If by pets, you mean fish, yes. Otherwise, no. So leave your gerbil/hamster/ferret/boa constrictor/cat/teacup chihuahua at home.

What is a land-grant/sea-grant university?

Good question. Land- and sea-grant universities were created by the Morrill Act, signed into law by Abe Lincoln in 1862. It gave land to states to create public universities so “average sons of average citizens” could learn the “agricultural and mechanical arts” and military sciences. UMaine offers all that — and way more — today. Oh, and these days, we call the mechanical arts “engineering.”

UMaine does not have permanent triple rooms; however, students who apply for housing after May 1 may be assigned to a temporary triple. Temporary triples are reassigned as doubles as quickly as possible.

Tropical. Just kidding. They’re cold and snowy, but despite what you may have heard, UMaine is not the Arctic tundra. Campus is really beautiful in the wintertime, and very fun.